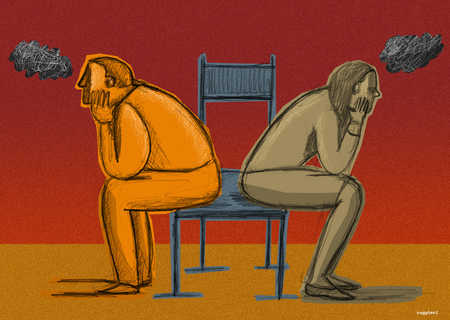 It’s no secret that things have been difficult lately. We are all less tolerant of each other. Less civil.  Less trusting.  I decided that I was going to fight this plague in humanity my way.  Not by being confrontational or polarizing in my speech, but by one conversation at a time.

It wasn’t long before the Lord gave me the perfect opportunity. It was at lunchtime.

And yes, it was a difficult conversation.

I was speaking with a coworker and she brought up having to wait on a “thug” with low-slung pants. I asked her what made her think her customer was a thug. She said that his looks did. I asked her if he was African-American, even though I knew the answer.  Now, I like this lady.  She’s a hard worker and she has a great sense of humor, and yes, she is Caucasian. But just like the rest of us, she has opinions. So I decided to confess something to her that had just happened to me that morning as I was coming in.

A member of the public was standing in line with a t-shirt on that had a symbol that could be considered as racist by some. It may even trigger anger or fear. So immediately, without knowing him, I made an assumption that he was a racist.

So I told my coworker this.  And she was offended that I would automatically assume he was racist.

Then I looked at her and said, do you understand now why I was offended when you automatically assumed the young man you were assisting was a thug?

It got quiet for a moment. Then I started speaking with her about how certain things made me feel. Not how they make the whole African-American community feel, but me personally.  Then she started telling me about her experiences.  We both left understanding each other better.  We could agree to disagree on some points.  But that’s perfectly okay.  Now we can spread a bit of that understanding to other folks.  One conversation at a time.

I believe that as individuals we have more power than we realize.  It is the ability to have a conversation. To listen to the other side.  No matter how uncomfortable it is.  But we must remember a few keys:

This approach does take courage. People in your family may be against it. They may not understand why you would entertain listening to someone with opposing views.  But that’s the problem.  We aren’t listening.  Everyone needs to feel worthy of being heard. Everyone.

15 A gentle answer turns away wrath,
but a harsh word stirs up anger.